Does Feminism need a re-brand? 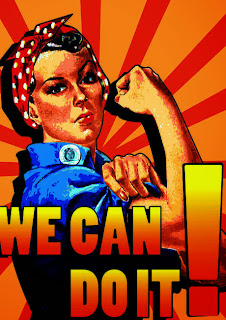 According to Elle magazine, the answer is yes. They asked three ad agencies to work with prominent feminists to Rebrand Feminism and the results are, well, kinda depressing really.
http://creativereview.co.uk/cr-blog/2013/september/elle-feminism

We are always being told that feminism had an image problem, particularly among young women. Why? Does Civil Rights have an image problem? Is it uncool to be anti-racist? Where does this image problem come from, exactly? Feminism is hardly a hot topic in the media, with daily coverage of it's evil ways. I can't even remember the last time I saw a grainy photo of a dungaree-weaing 70s feminist waving a placard in the paper. So where does The Feminist Fear come from?

Us old school feminists might think it all part of a dastardly plot by the agents of patriarchy to keep women from challenging the status quo, and any woman who obliges some kind of damned fool. The truth is that feminism is having a beautiful, Social Media resurgence, led by young women, with some kick-ass campaigning, initiatives like The Everyday Sexism project and websites like The Vagenda (who took part in the re-branding exercise. You can read their rationalisation here  http://vagendamag.blogspot.co.uk/2013/09/so-we-rebranded-feminism.html )

What is becoming clear is that the story of feminism is not an ancient monolith, fixed in time and space, like Stonehenge. It is alive and well and as varied as women themselves.