The Genius of Studio Ghibli

“This looks like it’s going to be a sad one,” my daughter said as we slipped Grave of the Fireflies into the DVD machine last night. She was half right. Describing the film as "sad" is a bit like saying Einstein was clever. It was heart-wrenching, traumatic and totally brilliant. 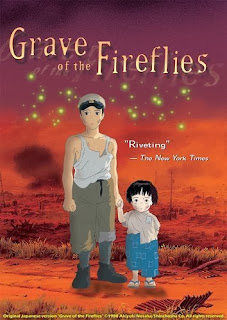 Grave of the Fireflies is the story of children and war. There is no sugar coating to the story here, no cotton wool to protect us from the harrowing tale of two children struggling to survive in Japan in the final months of WWII. Orphaned, abandoned, forgotten, the film charts their experience in all its emotional horror. It's like Come and See for children.


The film was made by Studio Ghibli -- best known for Howl's Moving Castle and Spirited Away--  and is another example of why this Japanese animation studio is peerless in the world of children's cinema. The breadth of its imagination, the boldness of the storytelling and the sheer creativity of its output is unrivalled. And it takes children's movies to some very dark and difficult places.

In Grave of the Fireflies, the story is framed in a way that makes the difficult subject matter manageable for children. The story starts with the narrator, a young boy, telling us the date when he dies. And immediately we see him in rags, slumped against a pillar, and watch as he closes his eyes and falls to the ground, dead. He is not alone; there are other dead or half-dead children all around him. He is found by a policeman who throws a sweet tin in his pocket away, releasing the spirit of the boy and his little sister. These two spirits, well dressed, happy and together, begin their final journey and the boy begins to tell their story.

So right from the start, we have been given the emotional tools to deal with the story we are about to hear. We know these children will die, and we know they will be reunited as spirits, looking well fed and at peace. This simple framing makes the story of their cruel abandonment bearable. No one escapes censure; the heartless relatives, the disinterested doctor, the well-off children mocking them. The policemen who treat the dead children as so much rubbish to be cleared off the street.

The film works on three levels: the very specific story of children in Japan at the end of WWII (the background of nationalist rhetoric, illustrated with a short scene of people fleeing while one man marches around shouting slogans); the story of children and war (and the lie of war, evidenced by the boy's sense of betrayal on hearing Japan had surrendered); and the story of vulnerable children, abandoned by family, society, state.

Posted by Katherine Tanko at 01:06