What's in a cover? 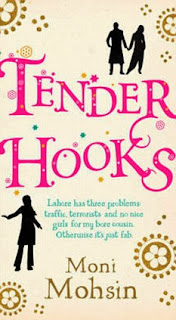 Tender Hooks, by Moni Mohsin, is a wonderful, fiendishly clever satire on contemporary Pakistan, but you wouldn't know it from its cover. This is one of those books that committed the terrible crime of not slotting neatly into any genre that could be easily marketed. So it got sent to the chick-lit ghetto and given a cover that the likes of me would normally never pick up in a squillion years.

I did pick it up though, but only because I had heard Mohsin speak at a Bath Literature Festival event on "Politics and Satire" and was so impressed I rushed out to the bookshop to buy it. I love books that take me different worlds I know nothing about and tell me what is really going on there. I hoped Tenderhooks would do that --and it did.

The book is best described as a kind of Diary of Adrian Mole, narrated by a snobbish, poorly educated middle aged Pakistani woman recording her efforts to find her cousin a wife. It is smart and funny and touches on everything from the education system to marriage to terrorism to "fundoos". Best of all it satirises the venality of the elites, their self absorption, snobbery, greed, lack of self awareness and distraction by minutiae while around them chaos and absurdity reign. It may be about Pakistani, but like all good books, it's about everywhere.

The title isn't great either, particularly when you put it into Google looking for pix of the book cover for your blog....Yeeewwwww.

Posted by Katherine Tanko at 13:10