Wadjda: a story for our times 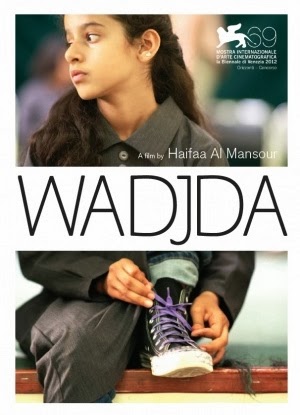 Wadjda has been getting rave reviews since it was released in 2012. It is the first feature filmed entirely in Saudi Arabia (where cinema is banned) and the first written and directed by female Saudi director Haifaa al-Mansour.

In the way of great films, it shines light on a complex, difficult issue with a simple, yet clever allegorical storyline about a 10 year old girl who wants a bike --forbidden for girls in Saudi.

Wadjda is a heroine and a role model for women: she is cheeky, bold, entrepreneurial, an independent thinker. Most importantly she considers herself an equal to her friend Abdullah whom she can beat when racing --except when he is on his bike. Her response is to get her own bike even though, she is told time and again, girls do not ride bikes. She is not even thwarted by the huge cost, determined to raise the money somehow. When Abdullah offers to give her his bike, she rejects it ("How will I race you then?")

The movie follows Wadjda's efforts to raise money, which she does with a mix of enterprise, extortion and entering the school's Koran reading competition. She is discouraged and laughed at, but is single minded in her determination. It is not the men who are cast as the great oppressors in this: they have so little contact with the world of women that women's concerns are not even on their radar. Instead it is the collusion of women and culture in keeping women passive that Wadjda must battle. Her mother is preoccupied only with holding onto Wadjda's father, who is thinking of getting a second wife. She straightens her hair because he likes it long and silky and smiles with pride when complimented on the tray of food she prepares for his friends. She even refuses the chance of a job at the local hospital that would save her a hated 3 hour commute to work because her husband would be jealous if she were to work with other men.

Her mother's fear and conformity is magnified at school, where the dreaded Ms Hassan scolds girls not to laugh outside as they arrive at school, reminding that "a woman's voice is her nakedness." When playing in the courtyard at break, some girls notice workmen on a distant roof and scurry inside to protect their modesty. Wadjda does not rush in: she continues to play hopscotch, confident that it is her right to do so. At every turn Wadjda challenges and questions.

It is no surprise when, at the end, Wadjda finally gets her bicycle. To see that she has succeeded in her determination. The final scene is of Wadjda and Abdullah racing their bikes, Wadjda pulling ahead and flying at speed in a wonderful image of forward momentum, personal freedom and victory. She rides to the end of a t-junction and stops, looking both ways. The message is clear: where to now, ladies?

A final note: this was the first feature film ever shot in Saudi Arabia, written and directed by female director Haifaa al-Mansour, who had to hide herself when filming on the street. To produce such an excellent, assured film is a rarity anywhere: to have done so under these conditions is astonishing and an inspiration to women everywhere.

Posted by Katherine Tanko at 01:30