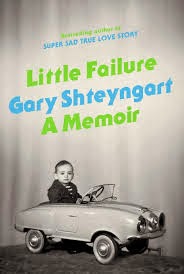 Saw Gary Shteyngart at the Bath Literature Festival yesterday. I've never read any of his work, but an excerpt I read in the Guardian of his new book, Little Failure, was instantly enthralling, so I snapped up a ticket when I heard he was coming. And I wasn't disappointed.

Shteyngart works in a genre, if you can call it that, that I love: Diaspora Fiction (or immigrant fiction). First or second generation writers talking about the immigrant experience, with a foot in two worlds and two cultures and all the conflict that goes with it. The Americans seem to do it particularly well, writers like Jhumpa Lahiri and Junot Diaz, who bring a freshness and vibrancy to their work that makes the writing of all those white, male New England scribes seem a little insular.

It's personal of course. My parents were immigrants, as were the parents of virtually everyone I knew growing up in Canada. Our street was like a map of post WWII Eastern European refugees: Poles, Hungarians, Yugoslavians, Czechs, and we all lived in two worlds. The Canadian world outside --safe, colourless, without history-- and the world of our homes where we each had our own traditions, foods, culture, history and ugly wartime traumas and secrets that no one wanted to talk about.

Little Failure tells Shteyngart's story: immigrating from Russia, aged 9, his desperation to be accepted in Ronald Reagan's America, dealing with the crushing weight of immigrant parental expectation, his parent's difficult marriage, his desire to be a writer.

I absolutely love the cover of this book! And in what might be a first, Shteyngart has produced a trailer for his novel, staring the likes of James Franco (a former student) and Jonathan Franzen. Now, that is marketing.

Posted by Katherine Tanko at 08:40